Member Akihiro Takaoka explains how his love of cycling led to the ultimate race against the clock.

As Akihiro Takaoka cycled up to the pyramidal concrete monument that marks Japan’s most northernmost point on Hokkaido’s Cape Soya, he had only one thing on his mind.

“The first thing I wanted to do was sleep,” he says with a laugh.

An understandable craving for someone who had just ridden the length of Japan in a record-breaking six and a half days.

At around 4am on August 5 this year, Takaoka clipped his cleats into the pedals of his carbon-framed Specialized S-Works Roubaix road bike and set off from Kagoshima’s Cape Sata in southern Kyushu. The goal was the northern tip of Hokkaido, 2,600 kilometers away. 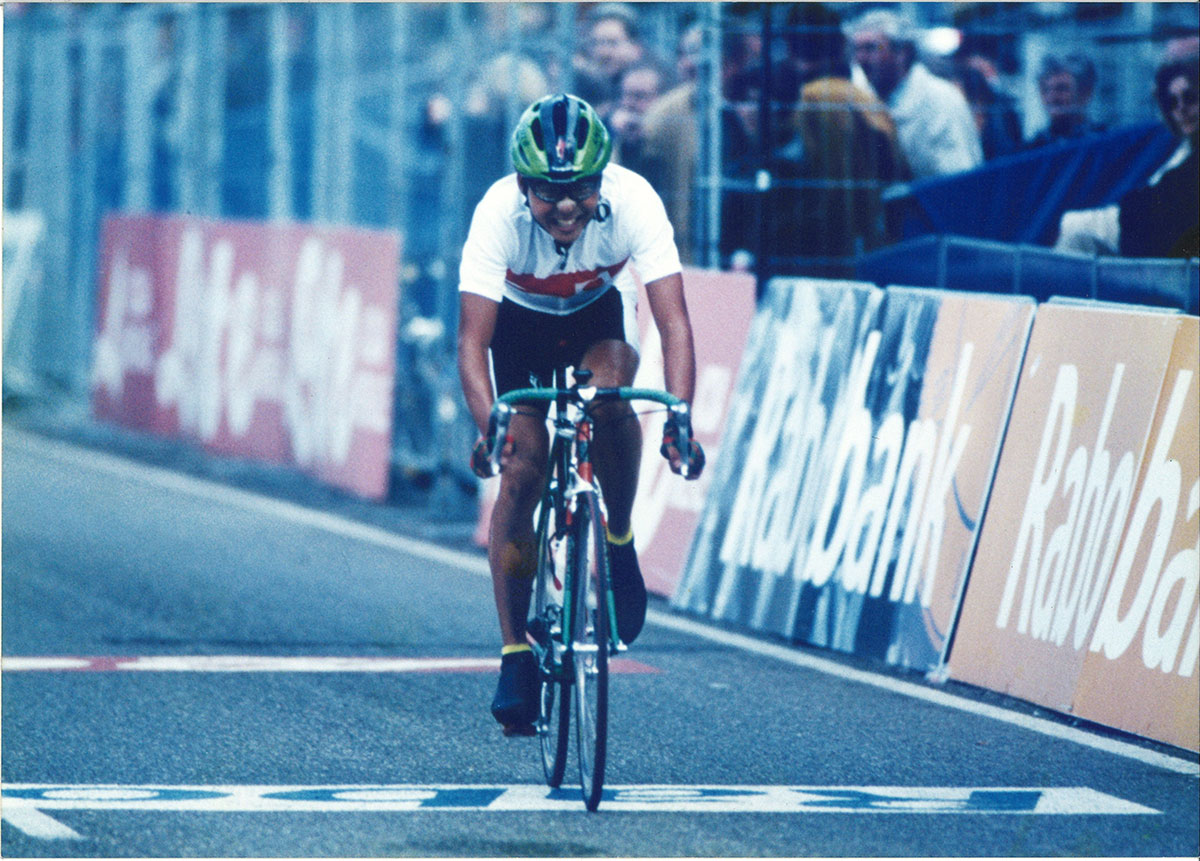 Image: Akihiro Takaoka at the under-23 world championship

Over the next six days and 13 hours, the Member clocked an average of 400 kilometers a day. Accompanied by two friends in a support car, he stopped every three hours to refuel and rest, with three-hour sleeps in hotels overnight.

But when Takaoka, who turns 43 this month, discovered the feat online in June, he knew instinctively he could beat it.

“The guy who set the record was not a particularly experienced cyclist,” Takaoka says.

Far from being the hubristic words of a former investment banker, Takaoka’s confidence was derived from nearly 30 years in the saddle, including a stint with a semiprofessional cycling team, an appearance at a world championship and more than a few podium finishes.

In July, he set about planning the route, setting up a website and recruiting sponsors. But some of his cycling buddies questioned the wisdom of attempting the ride during the height of Japan’s energy-sapping summer. For Takaoka, delaying the trip would present a different weather challenge.

Takaoka had already experienced the rigors of cycling in Tohoku in the fall. One day last October, he left Tokyo bound for Aomori. But by the time he reached Morioka in Iwate Prefecture at around 3am the following morning, the temperature had plummeted to 3 degrees Celsius.

He may have failed to reach his destination, but he had pedaled a staggering 550 kilometers in one go. It proved useful preparation for day four of his cape-to-cape run. To ensure he made the early-morning ferry to Hokkaido on day six, Takaoka left Echizen in Fukui at 5am. He arrived in the Niigata town of Tainai 22 hours and 444 kilometers later.

Takaoka’s passion for two wheels started when, as a 14-year-old, he bought a road bike with his pocket money. Weekends were spent among the mountains of nearby Tanzawa and Hakone in Kanagawa. A turning point, he says, was when he began training with a friend’s brother, a “super high school racer” who would go on to represent Japan at the 2008 Beijing Olympics.

Takaoka’s own trajectory in the sport was no less impressive. In his third year of high school, he placed third in a two-stage national championship road race. The top two riders were selected to compete for Japan at that year’s under-17 world championship.

After entering Tokyo’s Keio University, he joined a semiprofessional team based in Saitama. By 1998, he decided to take a year off from his studies to concentrate on cycling. He finished third overall at that year’s five-stage Tour de Tohoku and was third at the under-23 nationals. It was enough to earn him a spot on the Japan team for the under-23 world championship in the Netherlands.

“That was an amazing experience and my first trip abroad,” he says. “I used to watch European races on TV and knew those guys were much stronger than the Japanese pros. It’s a totally different world. I realized during that race how crazily fast they are.”

When Takaoka finally graduated and secured a job in finance, the bikes, helmets and Lycra were relegated to the closet while he focused on his career. But an itch can be ignored for only so long. In 2006, a decidedly heavier Takaoka dusted off his wheels and hit the road again. The race wins soon followed.

Up until March this year, he was competing in one or two amateur races a month and had won the 200-kilometer Tour de Okinawa six times, most recently in 2019.

But with all racing on hold due to the coronavirus pandemic, Takaoka, who quit banking last year and opened a cycle shop in Meguro in April, was looking for a new challenge—even with a metal plate in his wrist after crashing during a race last year.

“I thought this was the time to do it,” he says of his August odyssey.

Driving rain and typhoon winds may have heralded Takaoka’s arrival at Cape Soya on August 11, but they didn’t dampen his feelings of accomplishment.

And one for the record books. 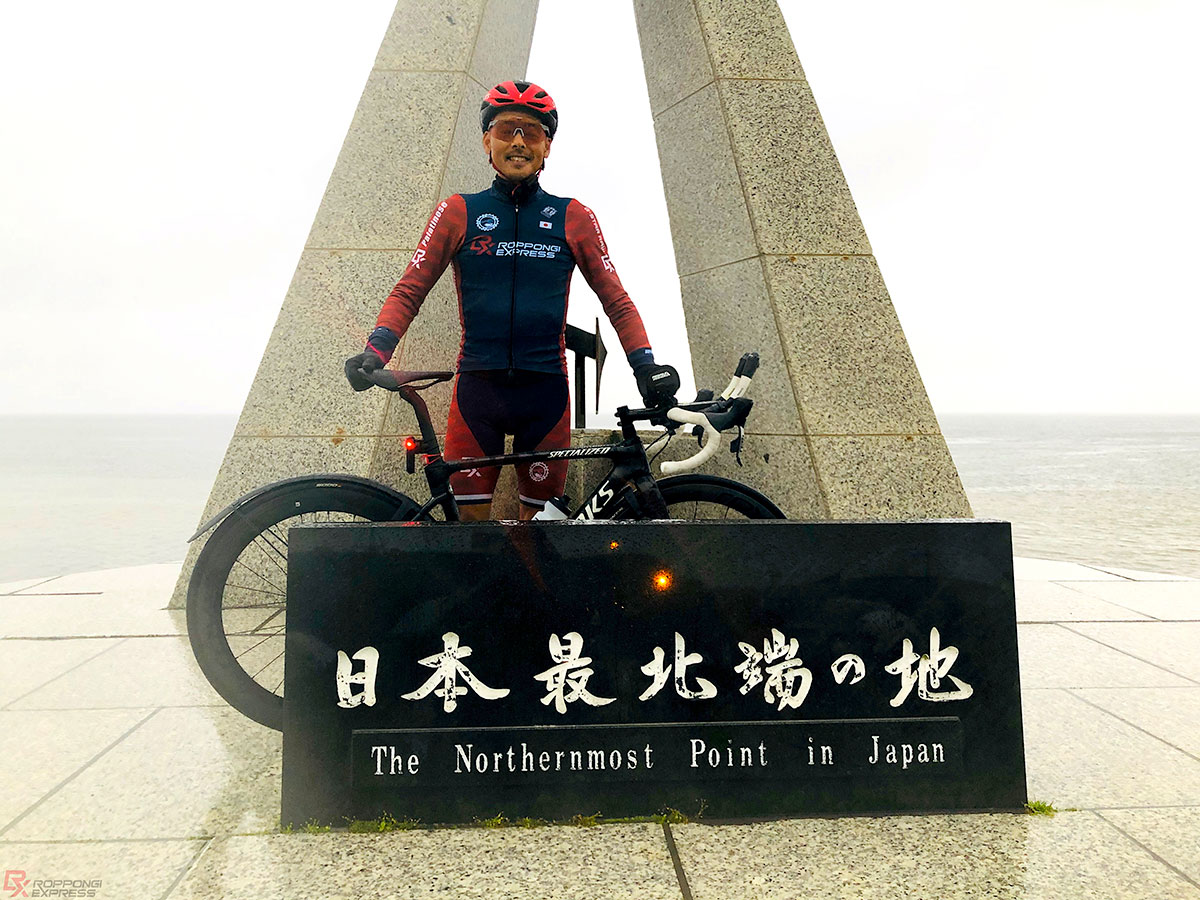