What’s the big fuss about happiness? In his latest book, clinical psychologist Scott Haas breaks down the Japanese secret to being content.

After a 15-hour flight from the United States, Scott Haas found himself stranded at Narita International Airport.

A sudden snowstorm had shut down the trains and the taxis were nowhere to be seen. Passengers’ questions about hotel options were met by stonewalling airline staff.

Haas noticed a telling contrast in the reaction of different passengers. Those from Western countries were railing at staff at the counter, demanding that something be done. But the Japanese in the terminal were mostly silent. A few spread out among the vacant seats, staking out spots for the night ahead.

“It wasn’t like people were resigned to the situation,” says Haas. “But [the Japanese passengers] realized by flipping out, it would just make everyone really miserable. So just be quiet, right?”

A clinical psychologist and award-winning food writer based out of Cambridge, Massachusetts, Haas has witnessed thought-provoking episodes like this ever since first traveling to Japan in 2003 as part of a tour for the movie premiere of Sofia Coppola’s Lost in Translation.

Why, he wondered, were Japanese commuters not showing frustration when a train was delayed? And how did they put up with excessively long hours at the office?

The answer is ukeireru, a cultural concept Haas explores in his newest book, Why Be Happy? The Japanese Way of Acceptance. 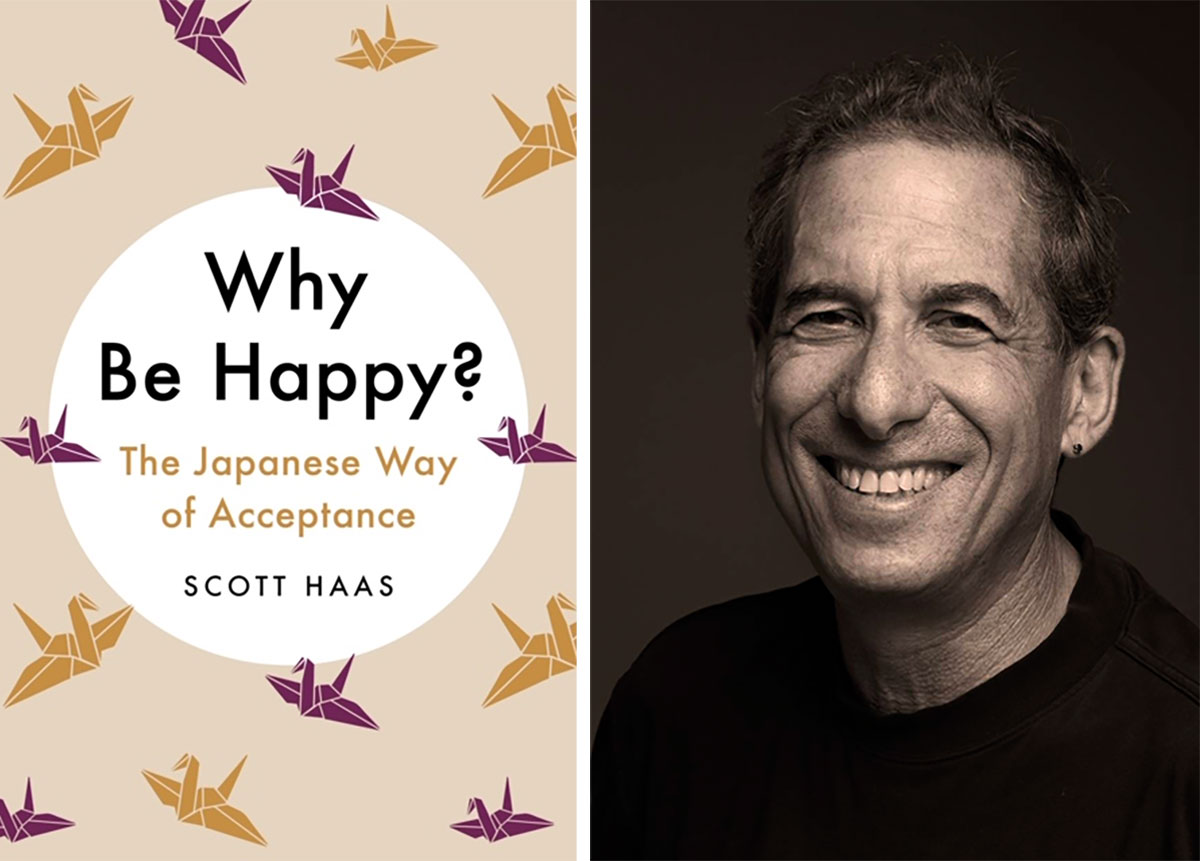 For Haas, the mindset of ukeireru underpins so much of Japanese culture that it pervades everything from child rearing to food preparation. The approach may not be exclusive to the Japanese. But what they excel at, Haas argues, is the ability to recognize a moment for what it is and then adapt to its ebbs and flows for the best possible outcome.

“In terms of the way conflicts are resolved or how you deal with stress, it’s a useful way to add to the way Westerners handle things,” says Haas, who appears virtually from his home to discuss his book on October 28. “It makes it all less personal. It’s not about you. It’s about the situation.”

To illustrate his point, Haas cites Japan’s much-loved onsen hot springs as an ukeireru means of dealing with stress. Long a point of consternation for flesh-shy foreigners wrapped up in body-image insecurities, the onsen represents for Haas a stark need to be comfortable in your own skin.

Haas takes care to differentiate the positive acceptance of ukeireru from the negative passivity of resignation. A person in an abusive relationship, for example, is not moving toward an effective solution by suffering in silence. Ukeireru offers a different perspective.

“[Ukeireru] is a way of recognizing that there’s a problem but understanding that there are possibilities that can resolve it,” Haas says. “[Look at it as] more of a challenge than a problem.”

Central to Why Be Happy? is the question raised by the title. Happiness, in Haas’ opinion, is too often a zero-sum game in the Western world, a battle of wills that inevitably leads to disappointment. But in much the same way that a parent can’t bear to think about their own happiness when their child is suffering, an ukeireru mindset is about finding a mutually beneficial outcome for all parties.

“Create a group agreement,” Haas offers in the way of advice. “A group consensus.”

Embracing a cultural concept from a different country may be easier said than done, but that doesn’t mean it’s not worth trying. Haas recommends starting out by simply observing rather than opining. By watching and listening, you become more attuned to the needs of those around you and more receptive to potential solutions to previously intractable issues.

And for Japanese who may be in danger of too often relegating themselves to the will of the group, Haas urges them to speak out from time to time. After all, someone has to come up with the idea that helps everyone.

Those suggestions might seem at odds with one another, but that’s exactly the point, Haas says.

“Both cultures have a profound and enormous amount to learn from one another.”